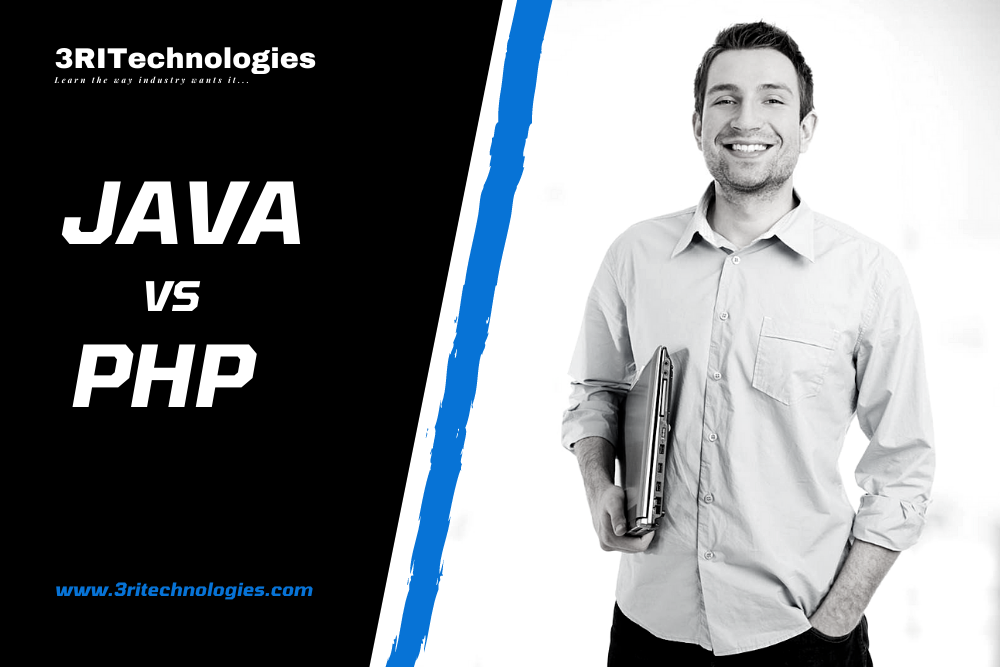 We all witness 2020-21; it has seen all-time low economies. To exist in the market, every business today has to opt for the online model. Here comes the need for a website which is the medium through which the transactions are made. Java and PHP are the two platforms that are being used for website development. Choose between JAVA and PHP is a tough task. Both have their positives and negatives. Opting between these frameworks depends on the user requirements. Undoubtedly, It is also hard for beginners and developers to choose both programming languages to learn web development.

Let’s go through a high-level overview to understand the working patterns of these two languages.

Java is a widely-used programming language that can develop both web and mobile applications. It is an object-oriented language. It is flexible and can be used on multiple platforms. This means it is of the typewrite once and runs anywhere (WORA). It has better-debugging tools and a rich set of application interfaces as compared to other languages. It also provides a secure environment and upgraded concurrency tools, making it suitable for scientific applications. It is stable and handles large projects.

With Java, the code is first compiled, which gets converted into an intermediate code for the OS it is running on. This process first converts the program into portable code, which is also called bytecode. As a next step, this mobile code (p-code or bytecode) is converted into machine language.JVM is a bridge between the source code and the binary instructions. Any device which has JVM installed can run Java code.

PHP is a term used for “Hypertext Pre-processor.” PHP is a server-side scripting language. It is embedded in HTML and can be used to customize web developments. PHP scripts are used in areas like web application development, writing desktop applications, and command-line. Content Management Systems (CMS) is software used to manage the creation and modification of digital content. PHP has played a key role in the foundation of CMS. Today many web pages, web applications, and web servers run on PHP code.

PHP is an open-source scripting tool that can be used with all major operating systems like macOS, Linux, Microsoft Windows, etc. PHP is used to build a small or medium-sized application compatible with software like Linux, Apache, or MySQL. Developing web pages with PHP is fast and highly productive. Many companies are using PHP applications like Facebook, Wikipedia, Yahoo, and many more. Learn PHP WebDevelopemnt at PHP Classes in Pune.

Now let’s have a look at their characteristics that make them different, PHP VS JAVA:

Java or PHP- Learning Purpose: Learning a new programming language? Which one to learn? Is it hard to decide?

5. Making Enterprise applications: When enterprise web pages are made via PHP, they work reasonably and occupy less memory. But Java is relatively faster as it uses various threads to manage and process the application. PHP and Java are the platforms available at free and paid licenses, respectively. As per the experienced programmers, PHP is better for small-scale applications, whereas Java is better for larger enterprise applications. Java programs can connect with many other systems like peer-web-services, databases, mainframe back-ends, and databases. With the help of its supporting tools, one more added advantage is that Java-made Frameworks are well-documented and more comfortable to install. With Java, the testing process is also comparatively easier.

Java is characteristically WORA (Write Once Run Anywhere). It means, applications developed using Java code can be executed on any other Java-enabled system. The credit here goes to JVM. Java Code converts into bytecode, and JVM interprets the code.

We can say Java code executes on any machine that has JVM (Java Virtual Machine). Therefore, Java is used to build applications for different business requirements. These may be web applications, Android applications, applications based on IoT, and more. With the popularity of smartphones, there is also an increase in mobile enterprise applications. Java is more reliable to solve the purpose. Developing mobile applications with PHP may require different frameworks, which will make them cumbersome and difficult to maintain.

While building a web application, the first and foremost concern is security. Applications developed are always susceptible to be hit by malware attacks. One word, “no compromises on security.” Java handles Security concerns in a better way. PHP and Java are both popular for web application development languages. But PHP loses to Java as it lacks some of the in-built security features. Developers have to rely on external frameworks for a secured platform. Java language is ahead of other languages, including PHP. Java security features are the main objects that make it the preferred choice for developing enterprise-level applications. The latest Java version has more enhancements on the security part. This offers end-to-end security to the developed applications.

Both PHP and Java are quite old programming languages and are widely used. Each of them has many tools, frameworks, and libraries. But here as well, Java is a bit ahead of PHP. Java is accommodated with better debugging tools and richer sets of API. Java helps with a lot of IDEs like Eclipse and Netbeans. Software developers use these features to develop the application. It also contains Notepad ++, Editors, and text editor as editing tools. The latest version of Java is equipped for complex systems of enterprises. It has the functionality of integrating with many external and third-party platforms. Java incorporates several packaging tools, which include Maven, ANT, Web Start, Editors. This helps with real-time web development. In PHP, only files are used, and there is no packaging concept here.

Java has reflection concepts like Repetitive Class, Abstract Class, Interface, or methods concepts from the initial days. Although PHP doesn’t have this kind of concept from starting with PHP advance version, some of the same concepts are not as advanced as one provided by Java.

These days it is preferable to have less expensive software

development. PHP is an open-source programming language. PHP web development companies can develop any code without paying any license fee. Programmers are free to use the PHP framework to build enterprise applications, and they can also customize the regulations according to the need of the business. However, it entirely depends on the organization to choose the web development language as per its requirements. Large-scale applications are more comfortable with Java as it provides the tools for hassle-free editing, debugging, and well-constructed applications. In Java, there are many editions for development like SE and EE for enterprise application development. But all these are at the cost of the license fee.

11. Which language has the bright future:

There is fierce competition between these two languages as they both are highly demanded in the market. All the organizations want to be up to the mark on the online front. These days medium of publicity is through the websites of the companies. More and more transactions are done via the internet. Every organization wants its websites to be updated with the latest technology. There are many website creation programming languages available in the market. Choosing one among them depends on the business requirements. Every language has its positives and negatives. Both Java and PHP have their grounds. They are used for the development of new applications and safeguarding the future of developed apps. Many organizations look into Java as their future due to its security and other rich features. It has formed the base for the longevity of many companies. It is also popular among developers due to its demand globally and various available tools. They have a pleasant experience working with Java.

The first thing to take care of while choosing a programming language is that it is just a means to develop the application. And it had to be selected after understanding and analyzing the need for future software. So, before deciding what programming language and other technologies to work, one should ponder the requirements.

From above, now we understand that these languages have both similarities and differences, and each has its own unique set of advantages and disadvantages. It is not easy to make out which language is better than the other. The use of the language depends on the type of application to be developed.

PHP was explicitly intended for web development, and it does that very well. In PHP, you can develop and deploy web pages quickly and also build small-scale applications. However, when there is a need to develop dynamic, complex, and complicated applications, Java becomes the preferable language over PHP.