Home > What is React JS? 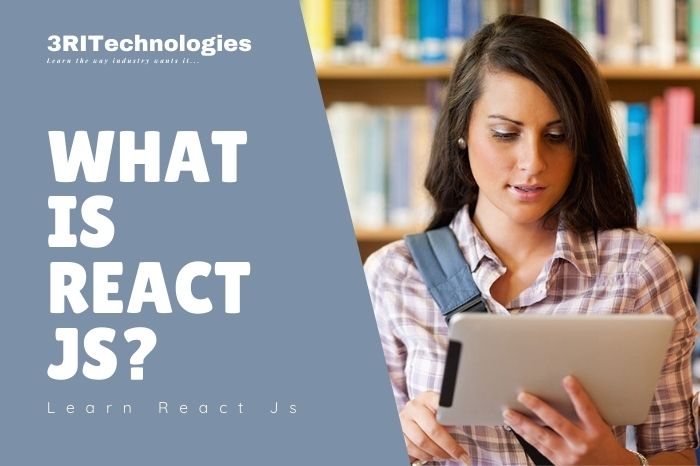 In today’s on-growing realm of technologies, it’s essential to understand the roles that can lead you to great opportunities. Every job today seeks basic technical knowledge, but to move further in the technological developing world, you need to broaden your prospects. Learning the coding languages and their relative application is what you need to develop the IT sector’s architectural skills. The most well-known applicable languages are CSS, HTML, JavaScript, etc. Today when seeking a developer job, you might encounter an additional skill that is React JS. What is React JS, and how is it useful in the development sector? This post describes the deep dive into the concepts, working, and diverse factors related to React JS.

Developers need a platform to built a user- interface or application. This platform is what handles all the codes, data, and functioning. React JS is an open-source JavaScript library that uses JavaScript language to build a user-interface and applications. The role of React JS is to handle the data layer for web and mobile apps. It also allows you to formulate the reusable components of UI.

React allows creating large web applications that can modify the data without reloading the entire page to the Developers. React generates astonishing results with other JavaScript libraries or frameworks that may include Angular JS.

To get a clear idea regarding React JS and its relative working, it’s crucial to understand JavaScript and JavaScript Libraries’ meaning and working.

JavaScript or commonly known as JS, is scripting or coding language that can be used to formulate and regulate web content. This web content comprises graphics, pictures, photo slideshows, and other interactive forms. You might have often seen your webpage refresh or reload itself without your manual instructions; this is possible because of the JavaScript language. The most efficient illustration of React JS is observed in Facebook.

To sum up, JavaScript is a robust coding language that can add graphics or animations to websites or web applications.

While on the other hand, it becomes quite hectic to incorporate multiple or repetitive animated graphics on a webpage through JavaScript. Recoding each function becomes a quite tiring job, and thus the role of JavaScript Libraries pops in. JavaScript Libraries are a set of previously drafted codes that can be used to apply standard JS functions reducing the extensive time and effort needed to formulate them. Use JavaScript library your coding chores and assure better and time-saving toiling.

What is React JS used for?

The use of React JS is done to develop a User Interface over website and web applications. React JS uses JavaScript Libraries for this purpose. The user interfaces are the menu’s assortments, search bars, buttons, and other interactive aspects of the website or application. Before developing React JS, developers tried to create different code for each interface, which turned out to be a tiring task. In 2011, Facebook engineer Jordal Walke developed React JS codes to improvise the User Interface development.

Why use React JS?

It’s important to note that what makes React JS stand out from the other user interfaces? What makes it so unique that it is one of the most recommended User Interface platforms over the web? Although, several user interface platforms offer similar functions as performed by React JS. Still, the prominence of React JS is high due to its diversified specialties. In this competitive world, where better options at ease are all one seeks, React JS has been used for a decade and has not suffered a single downfall due to its numerous features. These are the features that make it one of the most recommended user interface-generating platforms. The following bullets will provide you the map of React JS features in brief.

These are some of the stable features that have made React JS a must-have interface when using technical modules.

React Native and React JS’s history run down to the time in 2011 when Facebook was quite prominent. Effective and quick responses on such applications were must needed. It was observed that the Facebook ads were expanding and giving rise to new features. This introduction of new features demanded an up gradation in the existing app. React JS brought about the necessary up-gradation as a revolutionary user interface. The use of React JS brought up a big leap in the history of technology.

Further, it was quoted by Mark Zuckerberg that betting on HTML rather than Native was a bad choice. This signified the importance and development of React Native as a framework. Soon the world came to encounter the emergence of two robust forces, i.e., React JS vs. React Native.

What is React Native, and what are its features?

A cross-platform mobile network that is used for building apps and websites with the use of React JS is React Native. The role of React Native is to compile the native application components that allow the programmer to assemble a mobile application that can be operated over different platforms, including Windows, Android, and IOS, in JavaScript.

The features that have made React Native advantageous for multiple app developers can be stated in the following pointers!

These are some of the most outstanding features of React Native that have made it more prominent among App Developers. The availability of UI, excessive susceptibility, focus on better innovations, and a lot more is achieved through a single module, React Native.

What is React JS, and what are its features?

React JS is an excellent support to the front-end and the server as it is a JavaScript library. This JavaScript library aids the user in creating user interfaces for the websites and mobile-based applications. Have a look at the pointers to know more promising features of React JS.

These are the significant advantages of the demand and zeal to induce further prospects in React JS.

What are the roles played by a React Developer?

What is a React Developer?

With the upswing in React JS demand and use, the React JS Developer’s importance has also bolstered. A highly skilled React Developer plays multiple roles in an organization to lead it towards a better stature. A React Developer’s role includes multiple-stage working in the development and maintenance of the User Interface’s diverse components.

What tasks are performed by a React Developer?

The role of a React Developer is all behind the curtain. He performs designing, formulating, and implementing the user’s features in a website or application. A React Developer does this with the help of React JS.

Such developers are known as front-end developers, looking after everything a user sees over a web page, browser, or application. It can be stated that they are obliged to look after the appearance and feel of the website or application. React developers monitor the site and ensure a seamless ordeal to the users.

Some essential illustrations of the work done by Front-end React Developers are menu buttons, online forms, graphics, graphical icons, images, voice recognitions, zoom-in and zoom-out features of a mobile phone, and the list goes on.

A React Developer must have a detailed insight into the concepts of JavaScript, CSS, HTML, and additional programming and coding languages. These language skills are the necessities of a React Developer, incorporated into React JS open-source library system.

React JS is a wild realm, which furnishes the prospects to develop and grow in the technology ecosystem. Being based on the programming languages, it is flexible to use by anyone who has the necessary technical knowledge and wishes you get a deep dive into React JS’s concepts. Learn ReactJS Training in Pune.