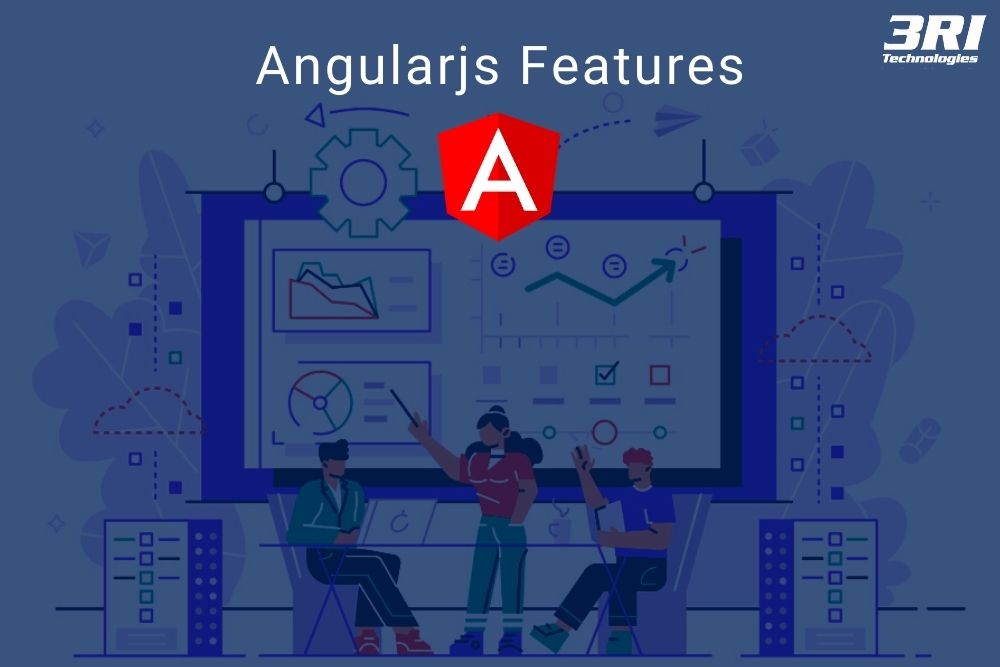 What are the features of angular?

AngularJS, an open-source Model-View-Controller framework, almost similar to the JavaScript framework. It is one of the famous web frameworks of this technological world.

This framework was needed during developing Single Page Applications. Thus, using it ensures the best creation of single-page applications.

Being having one of the powerful frameworks in the market, Angular JS has many features. Let’s look at following to know about its attributes:

MVC or Model View Controller architecture is the primary feature of this framework. This features hikes up the value of the framework in terms of client-side development and also sets the base for other significant features such as data binding, etc. Also, AngularJS automatically integrates all the elements of the app. Thus, developers can use this app to make web applications running smoothly.

When one-way data-binding architecture is allowed to amend the value of the data in the model to present that amendment in the view or vice-versa. But, AngularJS offers two-way binding solutions wherein developers can amend both models and also view it by amending the value. Thus, angularjs training makes the career of web developers viable; therefore, choosing this career will never be an appreciated decision.

AngularJS extends further to HTML as it has to have a set of inbuilt features called directives. With AngularJS, these directives can be self-created. The basic function of these directives is to increase the functionality of the HTML in a primary way to turn it compatible with dynamic client-side applications.

In this framework, one module specifies one app, and it is within the area of that module, all the distinct elements of the app exist. To add different elements in a module, different methods are used. To add controller, users may use the below-written syntax:

Moreover, users can add different elements to the module with syntaxes.

Thus, what is exceptional in the modules of AngularJS, it inherently overcomes the barriers of global function exploitation by restricting the objective of all the functions to the module to where it was used and defined.

AngularJS framework offers a list of event directives that run along with the HTML event. The most common events in AngularJS includes ng-change, ng-click, ng-blur, and ng-focus, which improves the potential of the website apps with two-way binding.

Angular JS is equipped with filters that are used to formats the data to improve fitting. With these filters, developers become able to amend the data into the relevant format of data, currency, etc. Further, the filters can use to arrange a string of data by including these to the directives with a pipe character.

In JavaScript, developers are considered to give more focus on the testability of the code. But, in AngularJS, developers are freed from this need. This framework has a support testing system with attributes like DI (Dependency Injection). Further, with it, testers can add the test data to analyze the behavior and output. Thus learning Angular JS Online certification will make your future viable and secured as this framework is essential among others.

AngularJS offers a set of services to communicate with the servers to receive or send information while also permitting the needed information without integrating with the MVC of the framework. The services offered by AngularJS includes $timeout, location, $http, and $interval.

What are directives in angularjs?

Directives in AngularJS are used to extend HTML. They are special elements starting with ng-prefix. It has the following directives:

Advantages and disadvantages of angularjs

Every framework has positive and negative aspects. Thus, AngularJS has pros and cons too. Let’s discuss both in the following:

AngularJS framework is not a gleaming stone. It also has some disadvantages. As of Javascript, AngularJs has some limitations, such as:

But, despite some disadvantages, this framework is regarded as the top among others. Thus, angularjs online training will make you complete in all terms.

To know more about this framework, let’s have a look at angularjs examples.

This above-mentioned example exhibits HTML code with some strange braces like ng-model, ng-app, and {{ }} and attributes. These built-in attributes in AngularJS are named as directives.

AngularJS offers a function data binding to assist the users in having a real-time reflection of the input provided by the user. There are different sorts of bindings, such as:

This function is used to display an element property in the respective view template by adding double curly braces syntax. Further, it is used to transfer properties given in component class to be shown in its template.

In event binding, an event is established whenever either a mouse is clicked, or a key is pressed.

This function is the same as Java, variables given in the parent class could be inherited by child class which is templates in this case. The basic difference between Property binding and Interpolation is, we do not need to store non-string values in variables while doing the use of interpolation. Thus, when we need to store Boolean or other types of data than use Property Binding.

In this, FormsModule in imports has been included. Also, users have to import FormsModule. Further, we have to comprise FormsModule since ngModel is not a property involved in the project we create using ng new project-name. Thus, we have to include it by importing this Module.

AnguarJS is one of the best frameworks used in web applications. It has its cons and pros. Still, it is a very popular application. Also, this app has a very bright scope as it will make your career viable. Thus, you should give it a trial.