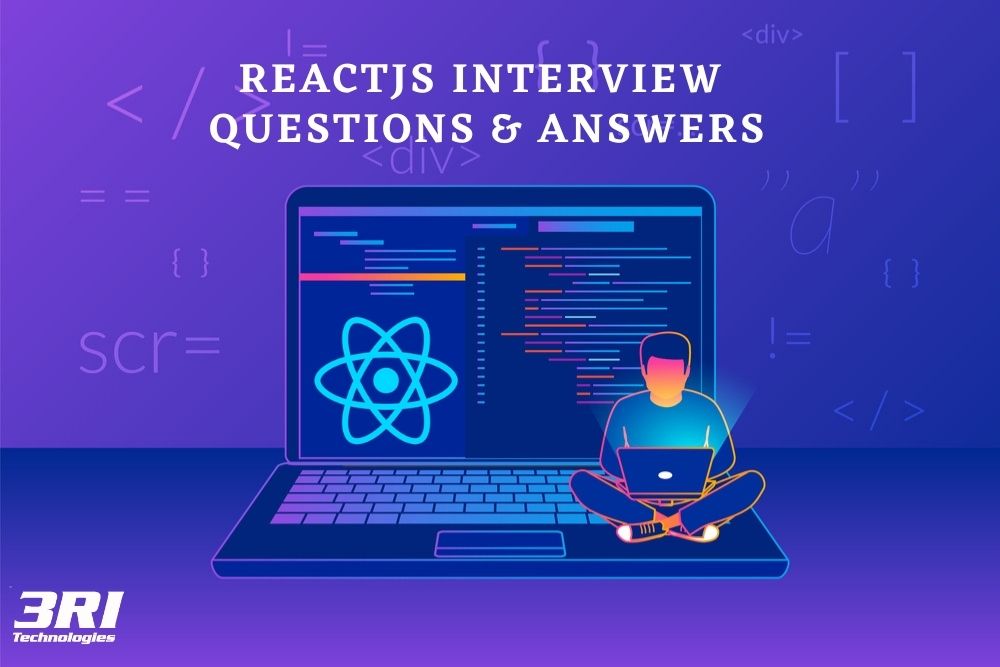 It is necessary to get guidance to learn React JS. There are many options available for online and offline training in React JS.

Following are the 50 interview questions and answers for ReactJS

React is also known as ReactJS or React.js. React is an open-source library for Javascript. Like Angular and the current Vue, ReactJS is one of the essential tools having more credit on the way we build a web application.

Q 2– How does ReactJS work?

Q 3- What are the advantages of ReactJS?

React JS is JavaScript library that is very well known because of its astonishing advantages in web development and transforming the workflow. Most of the leading companies, such as PayPal, Apple, Netflix, and other various websites are using React JS framework to improve the performance of their frameworks.

Q 4- What are the features of ReactJS?

Features of ReactJS are as follows

Q 5- What are the limitations of ReactJS?

Following are the limitations of ReactJS

DOM is a bona fide API (Application Programming Interface) for HTML and corresponding XML documents. It explains the logical structure of documents and the way a record is retrieved and coerced. The term “document” is used widely in DOM specification, XML is employed as a way of illustrating many different kinds of information that may be stored in various systems. However, XML exhibits this data as documents and the DOM may be used to handle this data.

DOM helps the programmers to create the documents, navigate their structure, and add, modify, or delete elements and content.

JSX does not have any derived implementation to read and understand it, so browsers are unable to read it. There is a need to convert JSX into native Javascript and HTML so that the browser can understand JSX

ReactDOM connects React and the DOM. Often used for mounting with ReactDOM.render (). Another beneficial feature of ReactDOM is ReactDOM.findDOMNode () which you can use to earn direct access to a DOM element. (Should be used moderately in React apps, but it can be necessary.)

Q 11- Difference between ReactDOM and React?

React, and ReactDOM are recently divided into two different libraries. All ReactDOM functionality was part of React in preceding v0.14. This confuses since recent documentation won’t mention the React / ReactDOM distinction. ReactDOM connects React and the DOM. Often used for mounting with ReactDOM.render (). Another beneficial feature of ReactDOM is ReactDOM.findDOMNode () which you can use to earn direct access to a DOM element. (Should be used moderately in React apps, but it can be necessary.) You have to use ReactDOM.renderToString() in your back-end code if your app is “isomorphic”. There’s React for all the other things. React is used to define and create your elements, for lifecycle hooks, etc. i.e. the guts of a React application. The arrival of React Native React and ReactDOM were divided into two libraries. React contains functionality which is used in web and mobile apps. ReactDOM functionality is only used in web apps.

Q 12- Differences between the class component and functional component?

A functional component is just a standard JavaScript function.

Class component specifies you to extend from React. This sets more code but will also give you some benefits which you will see later on. Component, create a render function which returns a React element.

Q 13- What are controlled and uncontrolled components in React?

In controlled components via callbacks like onChange takes its current value through props and notifies change. New costs as props are passed to the controlled element by parent components “controls” it by handling the callback and managing its state. It is known as this a “dumb component”.

// Use `inputRef.current.value` to read the current value of

Q 14- What are higher order components?

Q 16- What are the different phases of the React component’s lifecycle?

A React Component can go through four stages as follows.

Q 17- Explain the lifecycle method of React components in detail?

A React Component can go through four stages of its life as follows.

Initialization: With the given Props and default state, a component is constructed. This is concluded in the constructor of a Component Class.

Mounting: Rendering of the JSX returned by the render method itself in this stage.

Updating: The State of a component is updated, and the application is renovated in this stage.

It is a predictable state container for JS Apps. Redux is a small open-source JavaScript library for managing application state. It is a limited and straightforward API designed to be a predictable container for application state. It is executed similarly as the rendering function. The functional programming language Elm has a significant impact on Redux. It is commonly used with libraries such as React or angular for building UI. It is similar to Flux

Redux Thunx middleware that is used to manage the asynchronous actions in Redux.

While working with React, Facebook uses Flux architecture internally. Flux cannot be considered as a library or framework. It is the new architecture that supplements React and the concept of Unidirectional Data Flow. Facebook provides dispatcher library repo.

Q 21- What principles that Redux follows?

Q 22- Show how the data flows through Redux?

Redux architecture rotates around a stern unidirectional data flow. This indicates the data in an application follows the same life cycle pattern, making the logic of your app more foreseeable and straightforward to understand. To avoid resulting in multiple, independent copies of the same data that are not aware of each other, Redux instigate for data normalization.

Q 23- How is an action defined in Redux?

Actions are a payload of information that works in the transfer of data from the application to your store. It is done with the help of a store using store.dispatch().

Q 24- Explain the role of reducer?

Q 25- Significance of Store in Redux?

In one central location, all of your components are placed with the help of Store in Redux. This makes it available to all components without demanding a parent/child relationship. Store. The store is defined as the central location in which we store the state

Q 26- How is Redux different from Flux?

With user action or request, routing helps the user to direct to different pages. To develop Single Page Web Application, ReactJS Router is used. ReactJS Router describes multiple routes in the application. Redirection to a particular route takes place when the user types a specific URL in the browser. On top of the React, a React Router standard library system is built, and by using React Router Package, a routing is created in the React application.

Q 32- Explain the components of Redux

Redux has the following four components.

Your application complete state is stored in an object tree within a single store. It makes it easy to create universal apps as the state from the store is sequential, and clients can acquire it without extra coding effect. Debugging of an application becomes more comfortable with a single state tree. It allows you to hold on your app’s state of development, which speeds up the development cycle.

Q 34- What is the difference in state and props?

The dissimilarity between state and props is that props are fixed, whereas the state is changeable. The state can be updated and changed as defined by container components whereas prop is used to pass data from the state by child component.

Q 35- What is the purpose in between ReactNative and React?

Q 37- How are components and containers different in React Redux?

Part of a React UI is described as a component is a class or function. The container is an unofficial term for a React component which is connected to a Redux store. Containers accept the Redux state and update it and dispatch actions, and there is no need to render DOM elements; they substitute rendering to presentational child components.

Q 38- What is the difference between reacting and containers?

Q 39- How is React different from Angular?

Q 40- How is virtual DOM different from DOM?

Q 41- How is a state different from Props?

Q 42- How is Redux different from Flux?

Q 43- How is React Router difference from conventional routing?

In Conventional Routing new file correlated with each view whereas, in React routing, only one HTML page is implicated. In Conventional Routing, an HTTP send a request to the server, and a correlated HTML page receives it, and in React Routing only the History attribute is changed. In conventional routing navigation by the user goes through different pages for each view and in React Routing user is deceived into thinking as if they are navigating through other pages

Q 44- Significance of keys in React?

The primary function of keys in React is to identify the specific virtual DOM correlated to data driving UI. Keys are helpful as they minimize the rendering by reprocessing all the current elements in the DOM. Key should have a specific identification like a unique number or string, so that react can just change the aspect instead of again rendering them. Because of this reason, application performance increases.

Q 45- What are some of the cases when you should use Refs?

Refs are used in the following scenarios,

When particular actions like mouse hover, mouse click, keypress occur, events are triggered. How DOM elements are managed in the same way event managing takes place. Some syntactic differences are there such as

Set of properties are included in the event argument, which and they are unique to an event. Every event type comprises its properties and behaviour that can be accessed via its event handler only.

Q 47- What are synthetic events in React?

They are objects that act as a cross-browser wrapper around the browser’s native event. In one API, they blend the behaviour of different browsers. Due to this, an event shows dependable properties across other browsers.

Q 48- What did you understand by refs in React?

It means References in React. Ref is an attribute which is used to store a reference to a specific React element or component, that is returned by the components render configuration function. By render() it returns references to a particular element or component. When DOM measurements or to add methods to is needed, it is useful.