Home > Java Developer Skills: How To become a Java developer 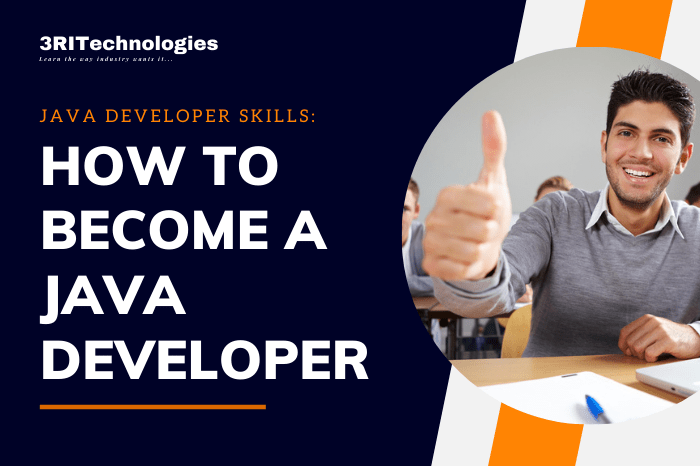 Java is widely used and ranks fifth among the most popular programming languages. Java celebrated its 15th-anniversary last year, i.e. in 2020. It is now widely used, as it has always been. It is a compiled language that does not restrict object code to a single processor or computer, making it an excellent choice for cross-platform software such as web applications and server code.

Java is also the most widely used programming language for developing Android apps. It’s also popular in cloud systems, deep learning environments, and Internet of Things technology. Java developers must have a wide range of skills, from a thorough knowledge of the basics to understanding the most current developments. Aside from the language, Java developers must consider how the programming process works and how to handle the environments in which it is executed.

Java is used by about 40-50 per cent of programmers worldwide. Java developers face fierce competition. To stand out from the other programmers, you must be a skilled Java programmer.

What does a Java developer do exactly? They design a variety of technologies, including laptops, mobile, cloud systems, and games. Java functions extend to big data applications in conjunction with Python.

If you wish to advance in your career as a Java developer, you must have the following essential skills:

● You must be familiar with JavaServer Pages (JSP) and servlets.

● You can also be familiar with the service-oriented design and online services (SOAP/REST).

● You should be familiar with web technology such as HTML, CSS, JavaScript, and JQuery.

● Markup languages such as XML and JSON are needed.

● You must be familiar with the principles and trends of object-oriented programming (OOP).

● You can also be familiar with abstract groups and interfaces.

● You should be familiar with File IO and serialization.

● You can also be familiar with Collections, which contain lists, maps, and sets.

● It would help if you were well-versed in control specifiers.

● You should be well acquainted with Dependency Injection.

Java developers must have advanced expertise.

Understanding Java requires more than simply learning the language. Many other components are needed to build, produce, and test code.

● A top candidate for Java programming jobs should have the following specialized skills:

● Python is a programming language.

● Blockchain is a form of digital ledger

Who is a Java developer?

A Java Developer is in charge of designing, developing, and managing Java-based software. Since Java is so commonly used, especially among large organizations, everyday roles vary greatly, including having a specific programme or operating on many at the same time.

As a Java developer, you would most likely be part of an IT group. Based on how the company is organized, you can have a single IT team or several smaller IT teams that focus on individual tasks. This second approach is often used in Agile settings.

The Java developer can report to a senior project manager or overall IT manager, who then reports to the CIO or another old IT head.

Employers also recruit Java Developers based on their skills when searching for new employees. Usually, job postings have the following designations:

● Java developers who are only starting out

● Developers at the mid-level

Early in her career, one Java developer may be delegated to work on application design. At the same time, a senior-level Java Developer may be responsible for the project’s overall operation, including maintaining streamlined architecture and overseeing teams.

A standard team on which a Java Developer works would most likely contain the following titles:

Depending on the circumstances, any of these positions can overlap or be merged into one.

How to become a java developer?

In today’s environment, being a Java Developer will significantly benefit your career! And we will demonstrate this by sharing some insights for being a competent Java Developer:

1. Understand the Fundamentals of Java SE

5. Get acquainted with the Hibernate and Spring Frameworks.

Join 3RI Technologies Java Course to place yourself on the fast track to a successful career.

Many Java developers and engineering students are concerned about their prospects and opportunities in the IT industry. They were both sceptical that the Java programming language will be in high demand in the next 5-10 years. To begin their career as Java programmer, they surveyed the potential need for Java programmers. Nobody knows what the future of Java will be like or if there will be any work left.

Java is available on all browsers and tablets, as well as in all countries around the world. It allows programmers to make programmes run almost everywhere. And it sparked the growth of a fantastic technology culture. Java’s brilliance is its network neutrality. Many individuals have been able to make a difference, gain a place in the spotlight with their framework or tool, be respected for their contribution, and genuinely impact the Java world due to the internet and the collective spirit that surrounds it. Java’s significance and success are increasing over time due to its impressive capacity to innovate and morph as the technology landscape shifts.

What is the way of survival in Java programming jobs in the future?

Java is a technology that is increasingly adapting to new demands. There is a new update every six months or so these days. Java developers who keep up with the rapidly evolving language and expand their skill sets with complementary technology always get a great job with a high salary. So keep upgrading your Java skills.

Java or want to learn more about it, come to the 3RI Technologies Java training course. You would undoubtedly learn greatly from trainers who are SME in Java and work in well-known MNCs. 3RI promises that you can get a job after finishing the training.